“Be Original, Work Harder” is the slogan for Spring 2021 Park Ridge Falcons travel football – and we gave out shirts to memorialize it in our community.  We want our kids to come together and play together as a team from our local communities, as a “flock of Falcons.” A group of individuals can leverage a lot of power and force if they come together. Often, a group or flock will form due to chemistry, talents, friendships, values, and even defense attributes. 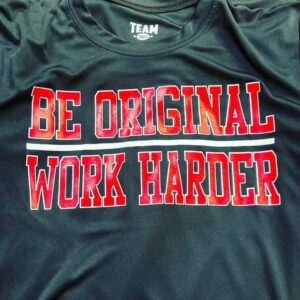 Birds of a Feather Flock Together

A very old adage that when applied to people, this phrase means that people who are similar to each other or share similar interests tend to spend time with each other.  In this Spring travel football season, we have 250 Falcons ready to tackle some of the best competition the Chicago suburbs has to offer.  As you know in nature, there are several benefits to flying as a flock or in group since it improves the bird’s chance of survival against predators because a large group of birds is stronger and better protected.  In football and with so many Park Ridge Falcons, there are many eyes that can easily spot a would-be marauder, someone who goes around looking for something to hurt, steal or cause chaos.  Since a predator will find it harder to concentrate only on a single victim, both the nature of a flock and the individual bird’s own chance of survival is greater together as a group.

Do Falcons Really Fly Together?

Not really – Falcons usually are solitary hunters. Known for their precision and speed, falcons seek out food like a bird of prey. Falcons are considered the fastest animal on earth, hunt at extreme speeds, descend from great heights, and dive in a fast, controlled fashion called a stoop. While falcons and hawks are closely related, there some differences between the two birds. Falcons catch their prey with their beak, the hawk will catch it with their claws.  The biggest difference between the two birds – hawks fly together in large flocks called kettles and falcons go at it alone. And when it comes to their home, both falcons and hawks are both incredibly territorial. They will fight and attack to defend their place, protecting themselves and their young from every type of predator.  Like many travel or elite team sports these days, that’s the problem – everyone loves you until you (or their child) becomes competition.

We hope ALL youth athletes succeed in their own personal development as we focus on the “work harder” in the skill training required of youth football players.  Whether you play in flag or travel tackle with us, we don’t expect you to do hot yoga or go to the same church, those are different types of training and development. We do expect each coach and team to give your child a fair chance to compete for their position – where the athlete really wants to play. Your child’s attitude and effort during practices will make the biggest difference in them achieving their own expectations.  Some might think they deserve something without the attitude or effort, but we know better from experience. We ignore parents who complain about things that don’t matter to youth athletes, and we simply focus our efforts on helping each Falcon compete against other Falcons (and other regional travel teams) for what they really want out of football.

Competition and team sports usually can be very positive, especially when you reinforce values like “you can be whatever you want to be”, see examples such as Stephen Hawking, Michael Jordan, and Tom Brady if you work at it hard enough. Work on yourself to become what you want on the field, in the classroom, or in life. A flock or youth sports team like our Park Ridge Falcons can help you get there. Sure, birds of prey can be aggressive, if not a little dangerous at times. Football is a contact sport. As a PR Falcon, your child will gain strength, confidence, and courage by every experience in which they really are forced to look fear in the eyes. As parents, just remind them to be positive, stay optimistic, play tough, remain determined, and then beat the odds as a team.